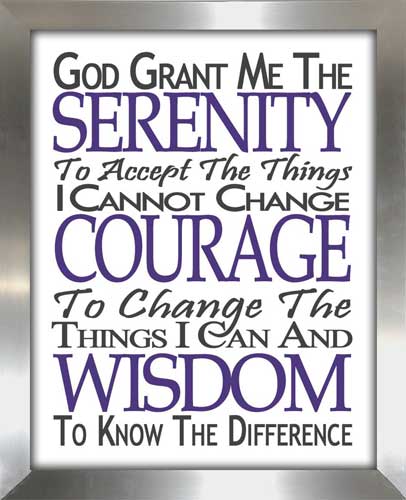 The Serenity Prayer is the common name for a prayer authored by theologian Reinhold Niebuhr (1892–1971), but is best known for being adopted by Alcoholics Anonymous and other twelve-step programs.

Though clearly circulating in oral form for many years, the earliest established date for a written form of the prayer appear in various versions in newspaper articles in the early 1930s reporting on talks given by Winnifred Crane Wygal, a pupil and collaborator of Niebuhr’s. Wygal included the following version of the prayer in her 1940 book, We Plan Our Own Worship Services, attributing it to Niebuhr.

Various other authors cited Niebuhr as the source of the prayer from 1937 on. Niebuhr included the prayer in a sermon at least as early as 1943, followed closely by its inclusion in a Federal Council of Churches (FCC) book for army chaplains and servicemen in 1944. Niebuhr himself did not publish the Serenity Prayer until 1951.

The most well-known form of the prayer attributed to Niebuhr is a late version, as it includes a reference to grace not found before 1951:

God, give me grace to accept with serenity
the things that cannot be changed,
Courage to change the things
which should be changed,
and the Wisdom to distinguish
the one from the other.

Living one day at a time,
Enjoying one moment at a time,
Accepting hardship as a pathway to peace,
Taking, as Jesus did,
This sinful world as it is,
Not as I would have it,
Trusting that You will make all things right,
If I surrender to Your will,
So that I may be reasonably happy in this life,
And supremely happy with You forever in the next.
Amen.

As I enter the third third of life, I am becoming aware of the role of elders today “to enlarge spiritual vision, being devoted to prayer, living in the face of death, as a living curriculum of the Christian life” (Dr. James M. Houston). I am a life long and life wide learner who seeks to: *decipher the enigma of our worth *rescue from the agony of prayerlessness *integrate spiritual friendship.
View all posts by R.H. (Rusty) Foerger →
This entry was posted in Prayers and tagged Change, Courage, Grace, Prayers, Serenity, Wisdom. Bookmark the permalink.