Where can I flee from Your Presence? 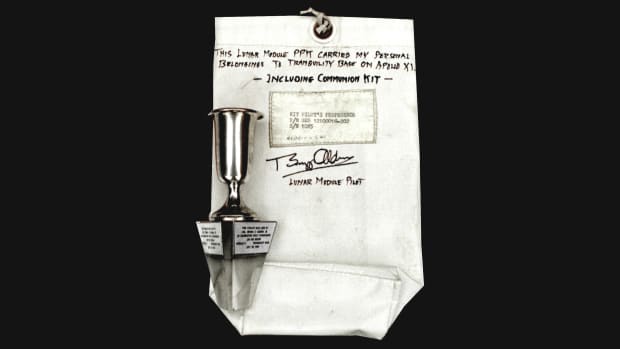 History.com reported that when Apollo 11‘s Eagle lunar module landed on the moon on July 20, 1969, astronauts Neil Armstrong and Buzz Aldrin had to do something very difficult: Wait.

They were scheduled to open the door of their lunar lander and step onto the unknown surface of a completely different world. But for now, their mission ordered them to take a pause before the big event.

And so Aldrin spent his time doing something unexpected, something no man had ever attempted before. Alone and overwhelmed by anticipation, he took part in the first Christian sacrament ever performed on the moon—a rite of Christian communion.

Aldrin’s lunar communion has since become shrouded in mystery and confusion, but the rite itself was relatively simple.The astronaut was also an elder at Webster Presbyterian Church, and before he headed into space in 1969, he got special permission to take bread and wine with him to space and give himself communion.

Men had already prayed in space, but Aldrin was about to go one step further—literally and figuratively. Part of his mission was not just to land on the moon, but to walk on it. To prepare, he took communion after the Eagle lunar module landed on the moon’s Sea of Tranquility during an hours-long downtime period designed to let the astronauts recover from their space flight and prepare for their moon walk.

The mood on the module was sober. Both Armstrong and Aldrin knew how important their mission was. “I was certainly aware that this was a culmination of the work of 300,000 or 400,000 people over a decade and that the nation’s hopes and outward appearance largely rested on how the results came out,” Armstrong recalled in an oral history.

As the men prepared for the next phase of their mission, Aldrin got on the comm system and spoke to the ground crew back on Earth. “I would like to request a few moments of silence,” he said. “I would like to invite each person listening in, wherever and whomever he may be, to contemplate for a moment the events of the past few hours and to give thanks in his own individual way.”

Then he reached for the wine and bread he’d brought to space—the first foods ever poured or eaten on the moon. “I poured the wine into the chalice our church had given me. In the one-sixth gravity of the moon the wine curled slowly and gracefully up the side of the cup,” he later wrote. Then, Aldrin read some scripture and ate. Armstrong looked on quietly but did not participate.

The first space communion was only experienced by two men, but it hasn’t been forgotten by the wider world. Lunar Communion Sunday is still celebrated annually at Webster Presbyterian and elsewhere to commemorate the event [it was Sunday July 20th when they landed on the moon].

In his 2010 memoir, he wrote that he’d come to wonder if he’d done the right thing by celebrating a Christian ritual in space. “We had come to space in the name of all mankind—be they Christians, Jews, Muslims, animists, agnostics, or atheists,” he wrote. “But at the time I could think of no better way to acknowledge the Apollo 11 experience than by giving thanks to God.”

The Psalmist captures the sense that there is nowhere in all creation one can escape the presence – and thus – the impulse to worship God:

Where can I go from your Spirit?
Where can I flee from your presence?
If I go up to the heavens, you are there;
if I make my bed in the depths, you are there.
If I rise on the wings of the dawn,
if I settle on the far side of the sea [moon],
even there your hand will guide me,
your right hand will hold me fast.

In what remote place on earth (or elsewhere) have you celebrated communion?

As I enter the third third of life, I am becoming aware of the role of elders today “to enlarge spiritual vision, being devoted to prayer, living in the face of death, as a living curriculum of the Christian life” (Dr. James M. Houston). I am a life long and life wide learner who seeks to: *decipher the enigma of our worth *rescue from the agony of prayerlessness *integrate spiritual friendship.
View all posts by R.H. (Rusty) Foerger →
This entry was posted in Prayers and tagged Eucharist, Giving Thanks, July 20, Lunar Communion Sunday, Psalm 139, Where can I flee from your presence?. Bookmark the permalink.

1 Response to Where can I flee from Your Presence?